Flags Are Now Permitted In Veterans Graves on Veterans Day

Veterans Day is an important and special day set aside to honor and thank those who served in the army, either alive or deceased. While Memorial Day celebrates men and women who lost their lives in service of their adorable countries, Veterans Day is for the commemoration of all men and women dead or alive who made ultimate sacrifices for their beloved countries in the army, which is why you need impressively designed flagpoles for such occasions.

In a speech by John James Duncan Jr, one of the most respected individuals known to have served as the U.S Representative for Tennessee's, as well as a well-known former lawyer, judge, and a long-serving individual of the Army National Guard, flags are now permitted on veterans graves on Veterans Day, something that wasn't allowed before.

According to John James Duncan, permission was granted by the Federal Floral Regulations for National Veterans' Graves Authorities. A letter supporting the consent for placing flags on veterans’ graves during Veterans Day was also written to the Veterans Affairs secretary. According to the letter by a representative of the Veterans Cemeteries Regulations Department, cub scouts and veterans' families are among the permitted individuals who can volunteer to place flags on the graves.

On Veterans Day, the most important thing to remind ourselves is that the flags represent the honoring of all brave individuals and their beloved ones who saw it’s crucial to dedicate their lives to protect their countries. Unlike other days such as Veterans Memorial Day, Veterans Day is set aside for one goal: Highlighting and appreciating the incredible work done by service members and the support their families gave them while in service.

Sometimes, many people living in Tennessee were discouraged from learning that they were not permitted to place flags on their veteran members' graves. This happened in Knoxville on Veterans Day. However, while the Knoxville incident disheartened many families and scout members, the Tennessee State authorities for the Department of Veterans Affairs strived to ensure regulations preventing flag placement on Veterans graves on Veterans Day were uplifted.

In response to the Knoxville incident, John James Duncan announced that flags will now be permitted on Veterans graves during Memorial Day, Veterans Day, and many other days. However, the placement of flags on regular days should comply with the set regulations, which will be dealt with on a case-by-case basis.

Honoring Veterans is essential because most people in many countries learn a lot about their nations from service members' work and sacrifices. Duty, courage, honor, unity, and integrity of a country are a few of the things associated with service members.

This is why veterans are so special. Furthermore, although life is full of challenges, service members face some of the most challenging moments in life that cannot compare with what ordinary people face. As such, the best way to honor your veteran family member is to get them a flag from an incredible source. Visit us https://atlanticflagpole.com for top-quality flags that'd make your celebrations breathtaking.

We’re a Fantastic Center for Flagpoles 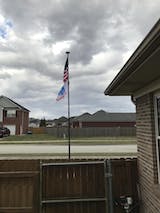